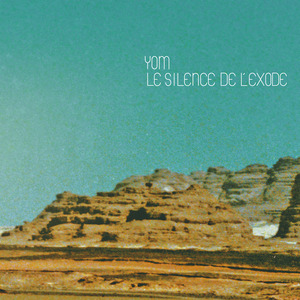 Legend has it that Yom discovered his calling at the tender age of five whilst listening to Peter and the Wolf.  He started learning the classical clarinet, culminating his studies as an adolescent in an exploration of the tradition of Eastern European klezmer music.  It is through klezmer that Yom ...

best expresses his musical soul but he never ceases to innovate within this tradition, which he fuses with the musical influences of his teenage years, rock and electronic music.

For Yom’s first album, New King of Klezmer Clarinet (2008) he slipped into the garish costume of his idol, the influential klezmer clarinetist, and colourful musical gangster, Naftule Brandwein.  Leaving Brandwein’s mantle behind him, Yom then ventured into more personal territory with the superlative Unue (2009), an album of duets recorded with an eclectic group of outstanding musicians, including Denis Cuniot, Wang Li, Ibrahim Maalouf and Farid D.

2010 and 2011 marked a turning point in Yom’s career, with the birth of his group the Wonder Rabbis, in the company of whom Yom slipped into a new costume, that of a superhero dedicated to spreading his love of music, be it Eastern European or more modern electronic sounds.

At the same time, Yom continued his fertile collaboration with Wang Li, resulting in the album Green Apocalypse (2012), an astonishing musical phenomenon representing the aesthetic and humanitarian culmination of their reflections and fears in the face of the environmental ravages wrought by mankind.

Whilst continuing to pursue new creative outlets with a diverse range of musicians (Le Silence de l’Exode, the Yiddish Cowboys), Yom returned to the studio to record a new album with a powerful electronic vibe, released in September 2013, entitled The Empire of Love.

In 2013, Yom also endeavoured to get back to the basics of klezmer music, as though going back to his roots, with “Back to the Klezmer” and its super-virtuoso band. However, it is the project “Le Silence de l’Exode” that is to have prime of place in 2014 and 2015, with the release of the album in August 2014 and the production of a version featuring a string orchestra in March 2015.

Exploring the Sounds of the Desert's Silence

A far cry away from some of his earlier mischievous musical proposals, Yom presents his most introspective project, which was originally a commission by the Festival d’Île-de-France, on the theme of diasporas. The clarinettist has thus plunged into the Exodus of the Jewish people guided by Moses out of Egypt.

The silence of the title could allude to the silence of the desert where they erred for forty years: an initiatory episode conducive to self discovery and synonym with a form of wisdom, yet also a chaotic moment copiously detailed in the Book of the Exodus, peppered with deaths, revolts and divine messages from the Seven Plagues of Egypt to the Seven Commandments. Full of twists and turns, the account related in the Old Testament focuses on the two first years of this formidable odyssey. The thirty years that followed were those of a doomed generation condemned to never reach the Promise Land in their lifetime, of a people punished for not trusting their guide. A people in fear, confronted with the silence of God and left to its own devices in a hostile environment.

These silences full of uproar are featured in Yom’s partition, which gives pride of place to minimalist influences and Eastern playing modes. He thus primarily uses a clarinet in G (the Turkish clarinet), whose sound is lower and warmer. He also makes room for his partners to improvise. The elder of his musical companions is the contemporary jazz double-bass player Claude Tchamitchian (Dave Liebman, Andy Emler etc.), a peerless improviser whose lyricism has roots in his Armenian origins. Farid D. for his part, has become a master in the art of playing Eastern music on cello, sometimes appropriating it as a ‘ud or percussion, even mastering quarter tones. As for Bijan Chemirani, the virtuoso heir of a line of Persian percussionists, he has well established his daf, bendir and zarb in present-day music. With a double culture, one foot in the tradition and the other in erudite Western music, these musicians intertwine Eastern, Mid-Eastern, Maghreb, Jewish and Armenian music and sensibilities.

This album has remained faithful to the spirit of the stage performance: totally acoustic (mixing included), recorded in the conditions of a live show with the musicians in semi-circle, without headphones. No re-recording, hardly any reverb, minimal editing, a mastering that respects the same dynamics, all contribute to a pure, naturalistic sound which makes do with the creaking of floor and chairs, the noise of the clarinet keys, the rustle of page turning –naked humanity faced with itself and its own bareness.

As for the subtitles referring to events in the Book of the Exodus (Ramses, red, water springing from a rock…) or states of mind (“sarab”, mirage in Arabic, solitude, exhilaration…), they are optional: everyone is free to invent their own.